The first step was the XDRIVE power transfer technology as the driver. None of the new unibody construction vans can work with the drive shaft technology of the HydraMaster CDS Truckmount, nor any of the designs of our competitors. Thus, a new power transfer system needed to be created. 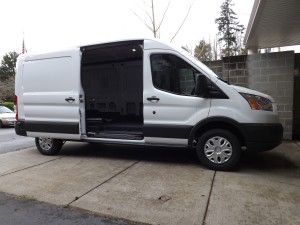 restoration companies planned to go in the future when it came to the purchase of their next work vehicle. With the long term viability of standard cargo vans being brought into question by increasingly stringent EPA fuel efficiency and emissions regulations, we wanted to know what cleaners and restorers were thinking about when it came to their future vehicle purchases. The Ford Transit was the dominant choice amongst companies who planned to purchase one of the new unibody construction vans. In addition, the inverse mounted engine on the Dodge Promaster makes any power take off hook-up extremely difficult, and would add a great deal of expense to the product. Clearly, the first place to start on the design and engineering of the new XDRIVE hybrid technology turned out to be the Ford Transit, especially since HydraMaster already manufactures the industry’s leading direct drive unit –the CDS, which goes exclusively into Chevy or Ford cargo vans. 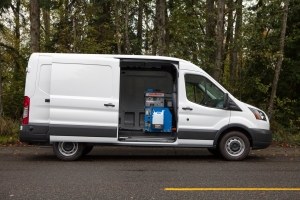 In our investigations, The Ford Transit offered the most efficient platform for our new CDS XDRIVE Direct Drive truckmount. The lightweight, unibody construction is built with high strength steel as well as boron steel in select areas. The medium and high roof options to the Transit offer cleaning and restoration companies something they have long asked for in a van – you can stand up in the back of the van. In addition, the extra cargo space can be used to carry more gear. Owners of the Ford Transit who were already using the van in their cleaning and restoration business identified several other distinct advantages:

So after careful consideration, the Ford Transit became the obvious choice for the new CDS XDRIVE Direct Drive Truckmount. Through our vehicle partner, Hudiburg Fleet Services we have already secured a continuing line of Ford Transit’s for when the XDRIVE is released. Best of all, they will be at prices there is no way you can get in your local market.

One thought on “Why did HydraMaster choose the Ford Transit as the initial host vehicle for their new truckmount technology?”